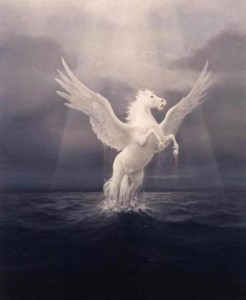 The gnostic myth of Pegasus in the “Gnostic Society”

There cannot be a more generous symbol to publicly represent us than the winged horse or Pegasus, precisely because it is “born” of a “sacrifice,” of the death of the Self-willed “I.”

“Pegasus was the winged horse that came out of Medusa when she was beheaded by Perseus. The Gorgon Medusa was once a beautiful princess of Libya. Because she was seduced by the sea god Poseidon in a temple dedicated to Athena, Athena transformed her into a monster. She had hair of snakes and whoever looked at her face turned to stone.”

Terrestrial by nature and winged by inspiration, Pegasus is an archetype difficult to conquer, and then very difficult to master.

“After his birth, Pegasus lived on Mount Helicon. One day, an ancient Greek hero whose name was Bellerophon, thought he could fly with Pegasus to Olympus where the gods lived. To stop him, Zeus sent a horsefly to bite Pegasus. Bellerophon lost control of his horse and fell to Earth.”

Only the brave, those who possess the secret of Hermes, the few, embody it in exchange for all the initiatory ordeals.

“Pegasus continued to fly alone and reached Olympus, where Zeus received him. Since then, Pegasus carries the thunderbolts for Zeus, who placed his figure in the night sky as the constellation of the winged horse.”

Through the Gnostic mysteries, unveiled today by the V.M. Samael Aun Weor, we know that the horse represents the “metallic soul” or “philosophical mercury” contained in the sexual energy, and that its untamed fury can be volatilized by a certain secret of the alchemists.

“Immediately after being born, Pegasus hit the ground with his hoof and there a spring of miraculous water burst forth. Perseus mounted the winged horse when he fought with the sea dragon to free Andromeda, who was chained to the rocks in the sea. Many tried to catch and tame Pegasus, to no avail. To catch Pegasus became an obsession for Bellerophon (prince of Corinth), so he then went to a soothsayer who advised him to spend a night in the temple of Athena.”

It is through the wisdom and love of the Guru that we can be initiated into the mysteries of the Pegasus or winged horse. Truly, it is only through our Divine Mother that we learn to use the electric sexual power of Pegasus.

“While Bellerophon was sleeping, the goddess appeared to him and gave him a golden bridle that would allow him to catch Pegasus. When he awoke, he found the golden bridle beside him, and with it managed to capture and tame the winged horse with ease.”

And the Guru will always remind us that, after reaching the sublime virtue of humility, we must always be even more humble than before or else we will fall into the abyss of perdition.

“Pegasus proved to be of great help to Bellerophon, helping him against the Amazons and the Chimaera. But Bellerophon felt himself to be more important and desired to reach Olympus mounted on Pegasus, but the horse threw him off, leaving him with a broken leg and hated by the gods.”

But He and She, our inner parents, will be there to tell us: “Woes you, oh warrior, oh fighter, if your servant sinks!” “But there are remedies and remedies.” “I know those remedies.”

Pegasus continued his flight to Olympus where he found protection. Zeus entrusted Pegasus with the task of carrying his lightning and thunderbolts. The winged horse flew and became a constellation, near Andromeda and Perseus.

The Divine Mother: “Therefore, be kind. Dress in beautiful garments. Serve yourself exquisite delicacies and drink sweet sparkling wines.” “But always, always, for love of Me.”